The horrendous murder of George Floyd - and the powerful Uprising that followed, inspired action from some Twin Cities workers. On June 16th, workers at the Seward Co-op Grocery store on East Franklin Ave staged a brief walk-out in the parking lot to demand Justice for George Floyd and the abolition of the police department.

Some 30 workers joined the walk-out and were met by an equal sized group of community supporters for a rally in the parking lot. Dream, a worker from the produce department, was the first speaker: “We are gathered here today to protest the murder of George Floyd. The injustices inflicted upon our communities have gone on far too long, and we grow weary of the police getting away with a slap on the wrist, if even that.” Taja, from the Wellness Department, reminded the assembly that Black Trans people continue to be killed in racist/transphobic attacks - and that Pride was also born of a rebellion kicked off by Black Trans women.

A group of rank & file workers organized the walk-out and formulated demands. The workers demanded that both Seward Co-op and the UFCW sign on to community calls to defund and disband the MPD - and that the union specifically denounce Police Federation President Bob Kroll. 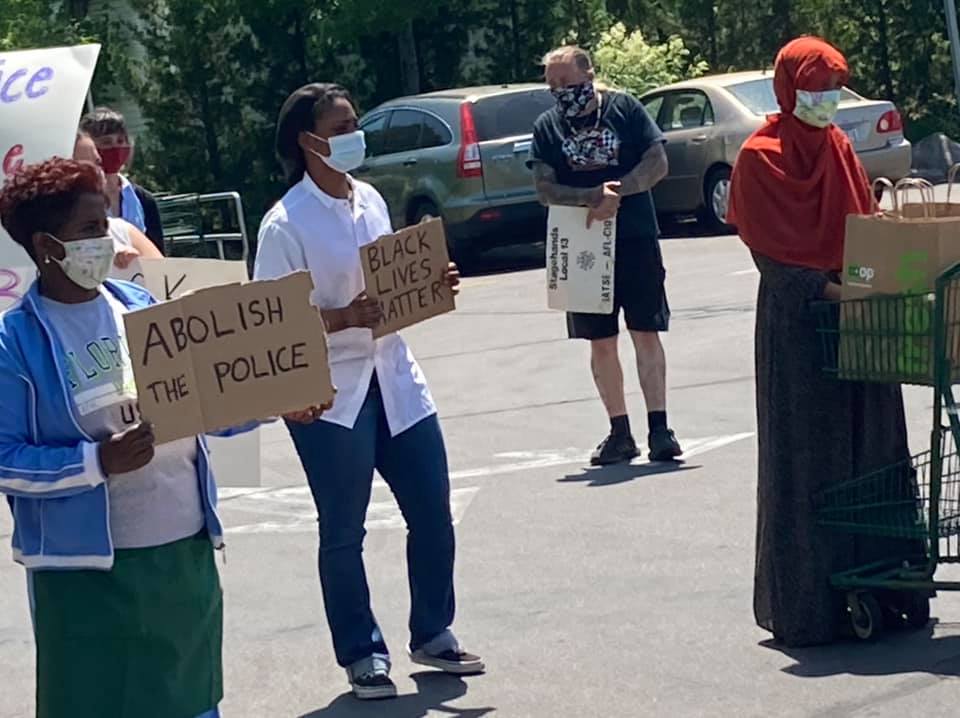 In the build-up to the action the UFCW shamefully tried to pressure the workers into calling it off. The Union Rep told workers that the action would poison the atmosphere for contract negotiations this Fall, that workers could be disciplined, and that the Local President wouldn’t like it. To their credit, the worker weren’t intimidated abnd pushed on with the action.

Union Reps who are beholden to the Union officers, and not the rank & file, often play the role of trying to check and contain workers militancy. We need workers’ Unions to be directly controlled by membership - not conservative “leaders” and their staff whoi think they know better than those doing the actual work.

Other Workers Actions for Justice Across the Twin Cities

Twin Cities bus drivers with ATU Local 1005 refused to use their vehicles to facilitate mass arrests of protesters during the uprising. “I refuse to transport my class and radical youth to jail. An injury to one is an injury to all,” said MTC worker Adam Burch.

AFSCME and other union workers led a protest at County Attorney Mike Freeman’s home demanding the prosecution of Derek Chauvin and the other cops who killed George Floyd. “The unprecedented uprising of grief and rage over the murder of George Floyd has changed the landscape. Rank-and-file activists are pushing their unions to take action and more unions are encouraging their members to participate in actions as visible union members,” wrote Cherrene Horuzak, of Local 3800 in Labor Notes

Telecom workers at the AT&T Tower in downtown Minneapolis walked off the job for 8 minutes and 46 seconds in a symbolic show of solidarity by CWA Local 7250.

Rank & File postal workers staged a march from a burned out post office to the site of George Floyd’s murder. “You Can Rebuild a Post Office, But Not a Life”, wrote Tyler Vasseur of Branch 9 of the Letter Carriers.

Workers at the Wedge Co-op on Lyndale Ave. in south Minneapolis organized a short walk-out and speak-out against police brutality and racism.